You are here: Home / Health and medicine / The last of the healthy children 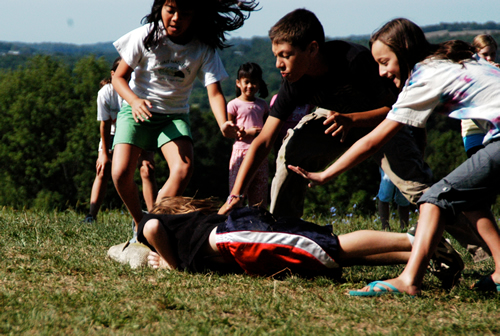 Within the medical profession, it seems that it is not only laboratories that make systematic use of dubious promotional tactics and partnerships. In paediatrics, a common practice which is rapidly growing is the aggressive promotion of “nutraceutical” and “therapeutic” formulas – imported and very expensive.

The indiscriminate “pathologization” of normal phenomena in young infants (less than 3 months of age) and their apparent cure with hypoallergenic formulas is currently a dominant strategy. The terrain is fertile for the self-fulfilling prophecy, as phenomena that go with child development, such as crying, colic, regurgitation, night awakenings, rashes, etc., normally resolve themselves once the infant is 3 months old.

In a recent international conference that took place in Chile, one of the speakers defended – in front of 500 people- the use of certain products for infantile colic, stating their effectiveness in 70% of the cases after 4 to 6 weeks of treatment. By definition, this is the natural evolution of infantile colic! That is how the founders of modern medicine described it and contemporary research has only verified it.

This strategy has been a commercial and media success. It has created mass concerns in mothers and families of infants, while the prescribers receive significant economic incentives . Furthermore, in order to align their knowledge with the company’s interests, prescribers receive technical information from the companies. The products concerned are prescribed to a high percentage of infants that are attended to (especially among higher socio-economic populations).
This situation is more evident in the field of food allergies.

Although data shows a rise in cases of food allergies in the past decade, practice in our country (as well as in others) is hardly ever based on “empirical” evidence. Diagnosis criteria are extremely vague, many times deliberately and under the impetus of the concerned parties. Diagnoses are based on non-specific, non-validated, or clearly inaccurate laboratory tests. Some of the figures that are presented are based on the self-diagnosis of patients in population-based surveys.

There are, however, other factors implied in this medical-sociological phenomenon. The quantity and intensity of the fears and apprehensions observed in many parents is one of these factors. These fears and apprehensions are linked to the ignorance, by both the general population and many doctors (especially recent graduates), of a healthy child’s physiology, and of the normal changes and phenomena that result from a child’s development. It seems that the level of exposure to a healthy child’s biology and to childcare in the paediatric curriculum of some universities is indeed insufficient. Hands-on activities are normally centred in tertiary fields (treatment of diseases), at the expense of the health monitoring of mother-child dyads, and family and community approaches.

The prevailing consumerist climate in the healthcare sector stimulates the “doctor shopping” phenomenon in families. It has also led to seeking second and third opinions. Check-ups for trivial matters and medication for minor discomforts are proliferating. Overdemanding parents (“that is what I am paying for!”) seek some kind of “complete immunity” for their children. Their birth, growth and upbringing must be perfect, with no pain and no typical human problems. The child must be free of colds, pains, cries, sleepless nights, rashes, too many or insufficient stools, regurgitations, gases, untimely awakenings, and temperamental changes.

The media, especially TV and “women’s” magazines, with emphasis on drastic testimonials and appalling cases, contributes to the pathologization of common phenomena in children. This creates excessive worrying about manageable situations among the population. We often see in documentaries and interviews notorious “gurus” who promote the use of expensive miracle drugs (coincidentally, alongside the manufacturing companies’ publicity campaigns). The complex networks of interest that involve media, pharmaceutical companies (or food companies) and health institutions are generally unnoticed by readers or television viewers.

Scientific communities, inwardly focused, tend to be unaware of the repercussions that their recommendations have on the non-specialized medical profession, the media, the public, and the population’s health. With more specialisation and less biopsychosocial orientation, there is a higher possibility that their rulings -unilateral and many times dogmatic- will come into conflict with the natural interests of the community, such as the promotion of breastfeeding, responsible care for infants and children, and the containment in health costs.

The interests of the sponsoring companies are visible in courses and conferences promoted by many scientific communities. Therefore, rarely will they stress (or even include) developments in areas such as breastfeeding, healthy baby food, or the biology of the common cold (against the growing and pernicious trend of conferring a chronic and dangerous nature to trivial child respiratory infections, which are part of the daily life of humans). Those invited to speak at conferences are normally chosen (or “suggested”) by the sponsors or belong to their payroll of paid speakers. The topics -like the exhibitors- go through the corporation’s filters (explicit or implicit). The assistants receive all sorts of gifts and treats with the name and logo of the “star” product. On occasion, the show is rather like a circus.

In the case of continuing medical education (CME), the attendees – mostly young professionals with no means of accessing formal education programmes – provide the speakers with their undivided attention, taking their words as gospel.

Each year, laboratories and food companies do not spate in costs in order to finance the long voyage to Latin America for foreign researchers who present their desired results, and find informal forums as well as the agreement of academic institutions and clinic directors (where promotions are mainly carried out in official clinic meeting hours).

Some companies have launched internet forums where parents and other people “concerned” may informally debate the problems that warrant the use of certain medicines and products. This is where the normal discomfort of infants is demonised, where suffering families find solidarity, and where the advantages of this or that product are described. The company concerned stays in the shadows. Often, the forum participants run aggressive lobbyist campaigns with the aim  of the (expensive) product becoming a collective requirement, hence, benefitting from State subsidies (a magnificent example of regressive policies).

There has been a lack of local research into the nature and effects of the pathologization of normal phenomena, as well as its economic and social costs.  For example, the huge increase in medical leave due to alleged serious illness in young children – responsible for the increase in health costs for nearly the past two decades – was practically not worthy of scientific investigation in the country.

The universities, however, are focusing their research on big projects related to pharmaceutical therapies, financed by international laboratories, or on prestige projects -often driven by individualistic motives- mainly in the field of molecular biology. The companies interested in public healthcare -both public and private, university or State- tend to engage in the traditional areas of demography and economic or management policies. What happens on the streets, at home or at the doctor’s surgery is hardly ever investigated in the academic field, even though they fundamentally shape the beliefs and behaviours of the population.

Even the rigorous Evidence-based Medicine (EBM), that receives its input from data published in the literature, does not tend to look into these areas. Moreover, the proletarianization of clinical practice -especially in primary healthcare- renders busy practitioners uninformed about the sources of evidence on which to base their decisions.  In this context, the medical representatives and the pharmaceutical and food companies do as they please -with their own emphasis, contents, tricks, and gifts- with the continuing education of most medical professionals.

The main health topics do not have sponsors. In the view of the relentless pressure of situations like the aforementioned, that work together, the main losers will always be those areas with no corporative patrons: natural breastfeeding, healthy practices in the upbringing and feeding of children, self-care, spontaneously resolving trivial and self-limited ailments; in sum, the global conception of a “healthy” or “normal” child. Nowadays, the concept of a healthy child is more or less a subversive creation, when placed against the background of powerful market forces and the prevailing culture that insists on distorting it through the pathologization of every single one of its features.

Translated from Spanish into English by: