You are here: Home / Is it risky to invest in the stock market? 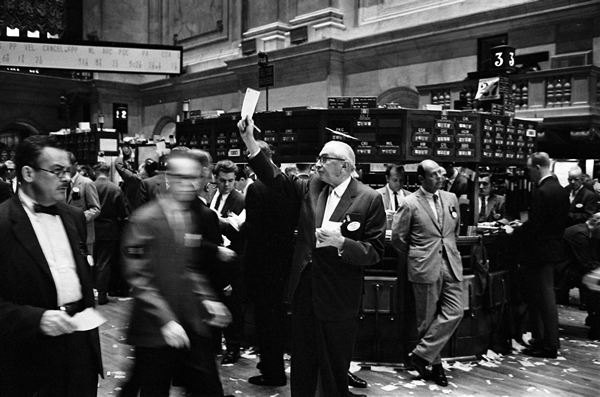 The stock market is considered by the majority of the population to be one of the riskiest investments possible. People who do not give a second thought to playing football pools or the lottery every week are horrified at the thought of somebody being so suicidal as to invest their savings in the stock market, the casino of all casinos.

The fear is understandable. But is it true that the stock market is really that risky? Well, first we should define what we mean by “risk.” The majority of economists that theorise about the stock market, but who have never themselves invested in it, equate “risk” with volatility: if a value rises and falls often then it is very risky. This definition is not very logical, unless an investor panics during one of the frequent (but reversible) declines, sells, and loses everything but the shirt off his back. Either way, following this definition of risk, is the stock market still risky?

Conventional theory holds that a short-term government bond (from the US government) is the least risky asset, followed by a long-term government bond, a corporate bond and, finally, stocks, the riskiest asset bar none. Turning, however, to the book by Jeremy Siegel, Stocks for the Long Run, which compiles US stock market data from 1802 to 2006. Does it follow conventional theory? It depends. One year sees the stock market as being an extremely volatile asset (and, therefore, “risky”): historically, in 12 months the market has risen 66% or fallen 38%; on the other hand, government bonds have had a much less mercurial nature.

Having said that, if instead of considering the period of one year we ask ourselves what has happened to the market over ten years, we will see that in any decade of the past two centuries the highest profits have been 16.9% annually, and the lowest loses have been 4.1% annually; greater earnings and lower losses than investing in government bonds (less volatile and therefore less risky). But the best comes when we take a period of 20 years: in this case, the US stock market has never- I repeat, never- lost value, even when taking inflation into account. The highest profits in 20 years have been 12.6% annually and the lowest (which weren’t loses) 1%, much better than a government bond that has to be continually swallowed up by inflation (and which has come to lose around 3% annually).

And with this I move to the concept of risk, which seems much more relevant and useful than volatility. As the great investor Martin Whitman, chairman and portfolio manager of Third Avenue Value Fund, says: “When analyzing the risks of an investment, you need to worry about the permanent loss of capital, and not about potential and unrealized loss.” What we should worry ourselves about is not the price of a stock nor the price of the stock market in general, falling from 10 to 5 one day only to rise to 12 the next day, but rather that the market falls from 10 to 5 permanently (at least, permanently in reference to the needs of the investor).

Given that stock investing –a very different practice from day-to-day speculating– should be a long-term decision, we see that in 200 years of the US stock market not a single investor has ever lost money when replicating the index and waiting 20 years. In fact, they have achieved an average profit of 7% annually after inflation, an investment much more profitable and secure than a government or corporate bond. In the long term, then, the stock market generally involves practically no risk of permanently losing capital (and therefore it is not risky at all).

It is necessary, however, to qualify this broad conclusion with two additional considerations. Firstly, I want to point out that I am talking about the stock market in general; that is to say, about stock indexes. Specific stocks, especially when acquired without any financial knowledge, can of course be a risky asset; the same can be said of stock managers that try to beat the market and usually succumb to it (I will deal with them another time). Investing in a stock index is simply betting on the very likely scenario that capitalism will continue to enrich a society; investing in a particular business is betting on the unlikely scenario that their management team will generate, over time, more money than I have paid for their stock; investing in a fund is betting on the oft-refuted hypothesis that your portfolio manager is more talented than the rest of investors.

Secondly, in some incredibly rare occasions, investing in a stock index can lead to meagre profits or even the permanent loss of capital (it can be risky). The clearest example is that of Japan: investors that have put money year after year into the Nikkei during the last three decades have not seen their capital diminish, but their profitability has barely reached 0.2% annually (in real terms). However, as I said, the case of Japan is very rare (in the US it has not occurred even once in two centuries), as the Land of the Rising Sun experienced one of the largest stock market bubbles ever known. To put it in numbers: the historical average of stock market indexes have been listed at prices between 13 and 17 times greater than the annual profits of the companies that make them up (a price-earnings ratio of between 13 and 17, in more technical terms), such that no diligent investor should ever enter a stock index with a P/E ratio of more than 20. Well, the Nikkei was situated these past thirty years systematically above 20, almost always above 30, many times above 40 and at times even above 100.

Entering a highly expensive market is risky (the economy should grow at huge rates so that the investment, at these prices, would make sense). Not because there’s a danger of the market “failing” (as long as there isn’t a nuclear apocalypse, this won’t happen), but rather because we are paying highly inflated prices for the businesses that make up the market. If, however, we are concerned about not overpaying, not even the most serious and difficult economic disasters should be able to seriously worry us. For example, during the several years before the Crash of 1929, the stock market never exceeded a P/E ratio of 17. Then, the stock market collapsed by over 60%, the economy sank into the Great Depression and the world was devastated by the bloodiest war in history. Were long-term investors harmed? No: a person who had from 1920 annually invested the amount equivalent of $1,000 of today in Standard and Poor’s index would have been able to retire in 1955 with the current equivalent of $230,000; investing $35,000 during their lifetime, the depressive US market would have “given” them $175,000, an annual return of 8.5% (discounting inflation and deflation). Not bad at all.

In the following chart the evolution of this investor’s capital can be seen during these busy years:

In conclusion: assuming you do not pay disproportionate prices for your stocks over decades –in the last two centuries the US market has never continually listed such prices–, the stock market is the most secure and profitable investment that exists, and one which everyone can enjoy. If you invest regularly and with a long-term perspective, itis almost impossible to lose money and, more so, not earn it in abundance.